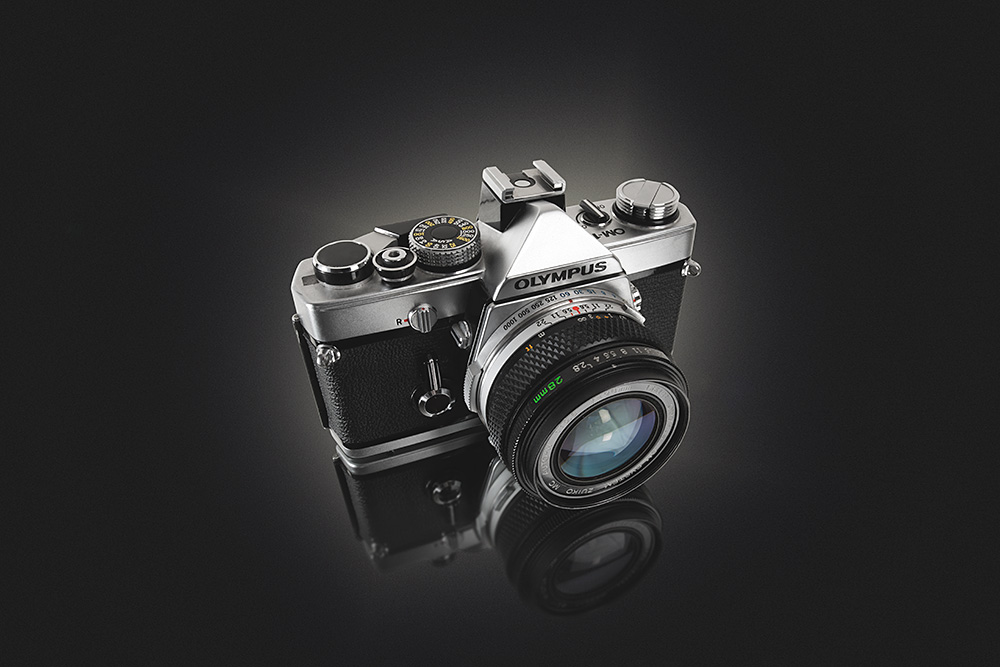 I purchased my first 35mm camera in 1997 from my local camera shop (T4 Cameras) which was a classical well built Olympus OM-1 film camera. Using studio lighting (elinchrom) I decided to photograph the camera with a goal of achieving a crisp reflection for a typical product photography styled image

I originally brought the Olympus OM-1 camera for my college course before I progressed onto Reading to study a BA Hons in Professional Photographic Imaging. The cameras been sat on my shelf at home collecting dust so I decided to polish it up and give it the attention it surely deserves after serving me well throughout my first photographic college course.

My goal was to capture a crisp reflection so I used a mirror which was reflecting a pure white ceiling. I used two studio flash lights. One was equipped with a soft box and the other was reflecting a stronger light source bounced from a silver lined umbrella. I’m comfortable when I have time to experiment with lighting and often I work with only one light before adding others into the equation because it can be confusing to determine what effect each light is producing? After both lights are set up and producing the desired effect I then add smaller reflectors which can be anything from pieces of paper to photographic boards to bounce light mainly into areas of shadow. The Nikon D810s Live Preview feature really came into play as it allowed me to conveniently position the camera and check light changes even whilst zoomed into an area of the image. This is something that would have been much more difficult if having to use the standard view finder. The most important thing for me is to capture a well exposed sharp image because so much can be changed and enhanced in post processing using techniques available in Photoshop.

The camera I used to photograph the Olympus OM-1 was a Nikon D810 DSLR which was positioned on a tripod using a wide angled lens (14-24mm). I shot the image at full resolution (RAW) which delivers a 16bit 7360px x 4912px image with stunning quality at 64ISO. The post processing was pretty simple. I wanted a darker background so using the usual pen tool techniques I sliced the camera onto a separate layer and used a mixture of gradient and distortion techniques to deliver a spot light effect in the centre of the composition (behind the camera). I am pretty pleased with the outcome but in future projects I’ll look at reflecting darker surfaces into the mirror which would have achieved everything in camera without any need for darkening the original white background